A Turkish spread to Trigger your Taste Buds

The Turkish food scene in London seems to consist broadly of two categories of restaurants: those that serve modern Turkish small plates or those that cater to your drunken cravings of greasy kebabs. I have felt that it is a shame how authentic Turkish cuisine with its freshly sourced ingredients and hearty portions is so hard to find in London. I miss the Pide and Lahmacuns you get for £5 or under on the streets of Istanbul. Don’t get me wrong, you can definitely get a Pide in London but be prepared to pay at least £12 for a tiny one. Given this, I was pleasantly surprised to find this little cafe in London called Bold, situated a 7-8 min walk from the Tufnell Park station. This cafe is run by a really lovely couple who came over to London from Turkey just a year ago, leaving their family and jobs behind to set up this cafe, starting from scratch. This is why they named it “Bold”. And I heartily congratulate them on not only making this big move but also executing it so well.

Before I get into the details of the menu, here’s an interesting fact I thought I’d share about the cafe. For those that know the TV Series “Fleabag”, its Season 2 was actually filmed in this cafe. The interiors will look different because the cafe has undergone a significant overhaul but it’s still a cool thing to know if you were a regular viewer of the show!

Now getting to the breakfast, firstly I recommend getting there early and sitting in the dining space by the kitchen where you can see the dishes being made right in front of you. The brunch dishes are served up in very generous portions, so one dish per person should be enough – but if you’re feeling particularly hungry, you can get three dishes between two to share (let’s admit you’re all going to do this!). We tried a range of dishes, both sweet and savoury. First came the full Turkish breakfast, which is a massive platter of sourdough with grilled halloumi, fresh feta, sujuk (Turkish sausage), tomatoes, cucumber, eggs, filo cigar, honey and more. A much healthier yet filling and delicious version of the full English. 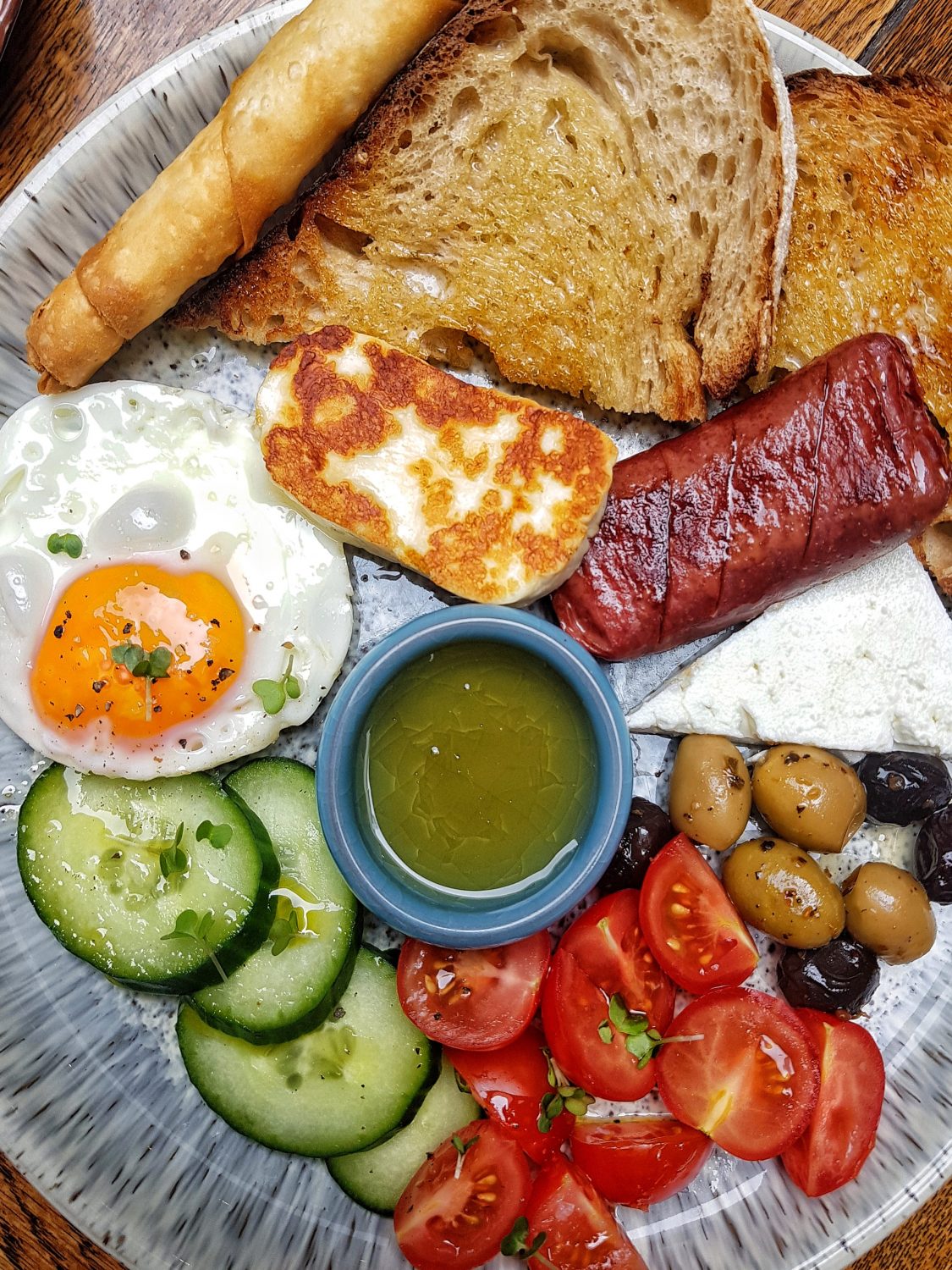 Next came my favourite dish of the day: the Çılbır aka Turkish style poached eggs with garlic yoghurt and peppered yoghurt. The dish may sound simple but the combination works wonders. The yoghurt is creamy without being too thick and the garlic and peppered butter combo is hard to beat – we all know how amazing garlic bread tastes, so hopefully I don’t really need to convince you guys on this one. The runny eggs blend in just beautifully with that buttery yoghurt, making it a heavenly dip for your sourdough. Not sure if my picture does it justice- guess you’ll just have to try it to see why I am raving about it! 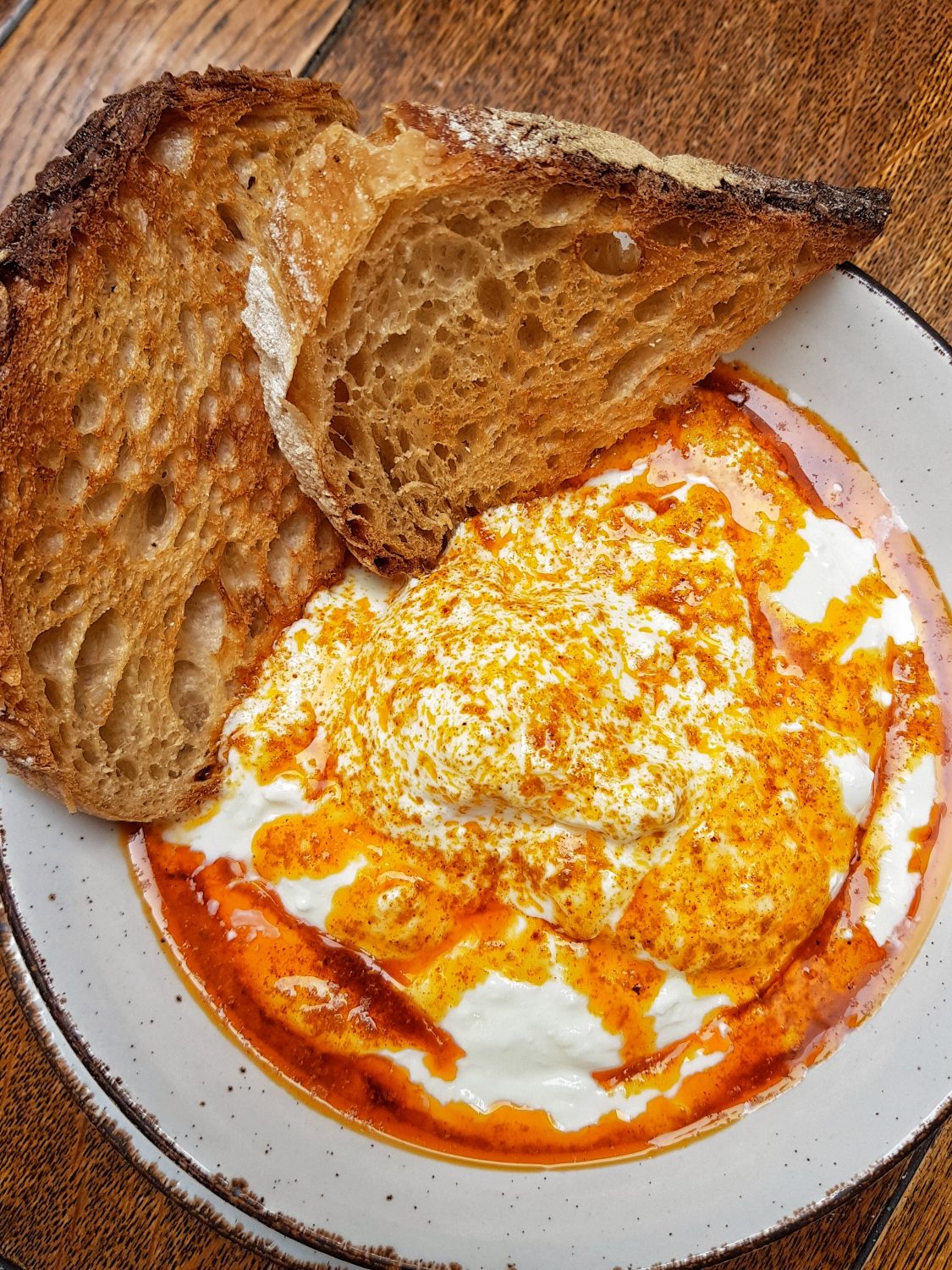 Third in line was another eggy dish, but this time sunny side up and served with Turkish sausages. This reminded me of a Shakshuka but was much more spicy and meaty obviously, which I prefer! The sausage is imported from Turkey to ensure the taste is authentic as possible. This dish was called the Sucuklu Yumurta. Rolls off the tongue, I know. 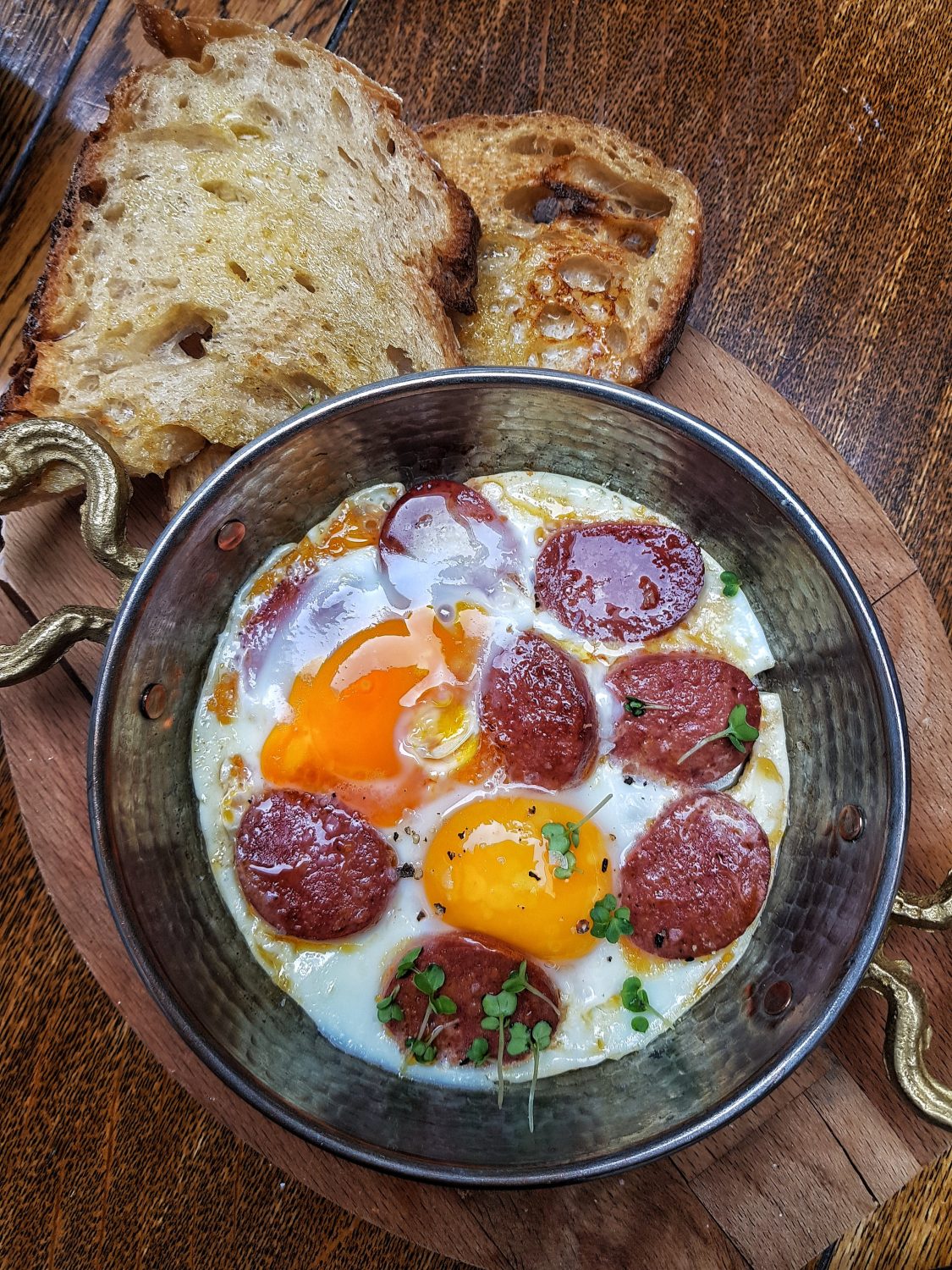 Last but not least came the buttermilk pancakes which were super fluffy, even after I’d poured on a ton of syrup and taken over 40 shots! And they not only looked good, they tasted great too. Not too sweet and a lovely flavour from the maple and the toasted coconut. The muesli on top also added to the texture nicely. A must order! 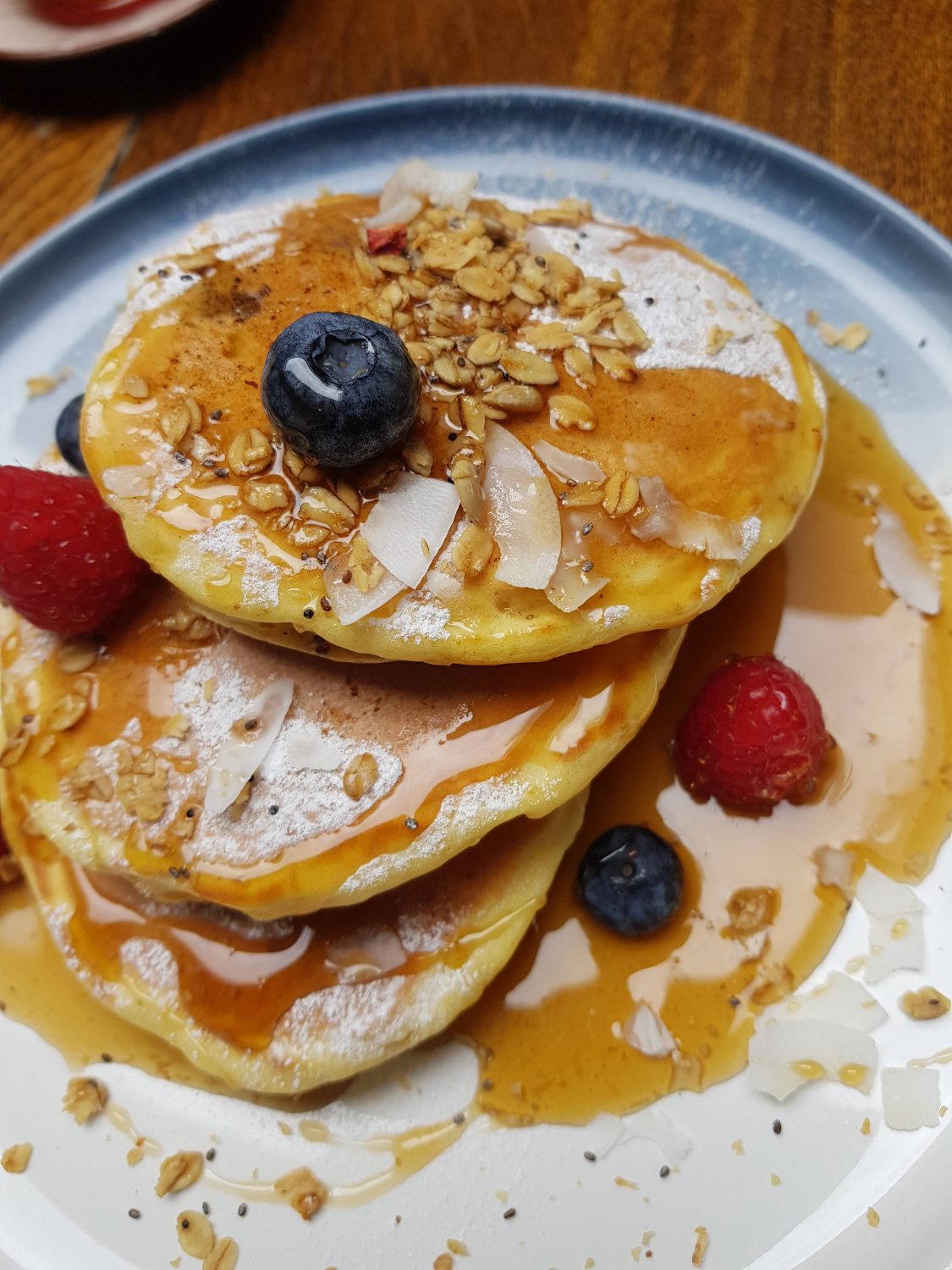 Oh and you gotta finish the meal with a Turkish tea or coffee! 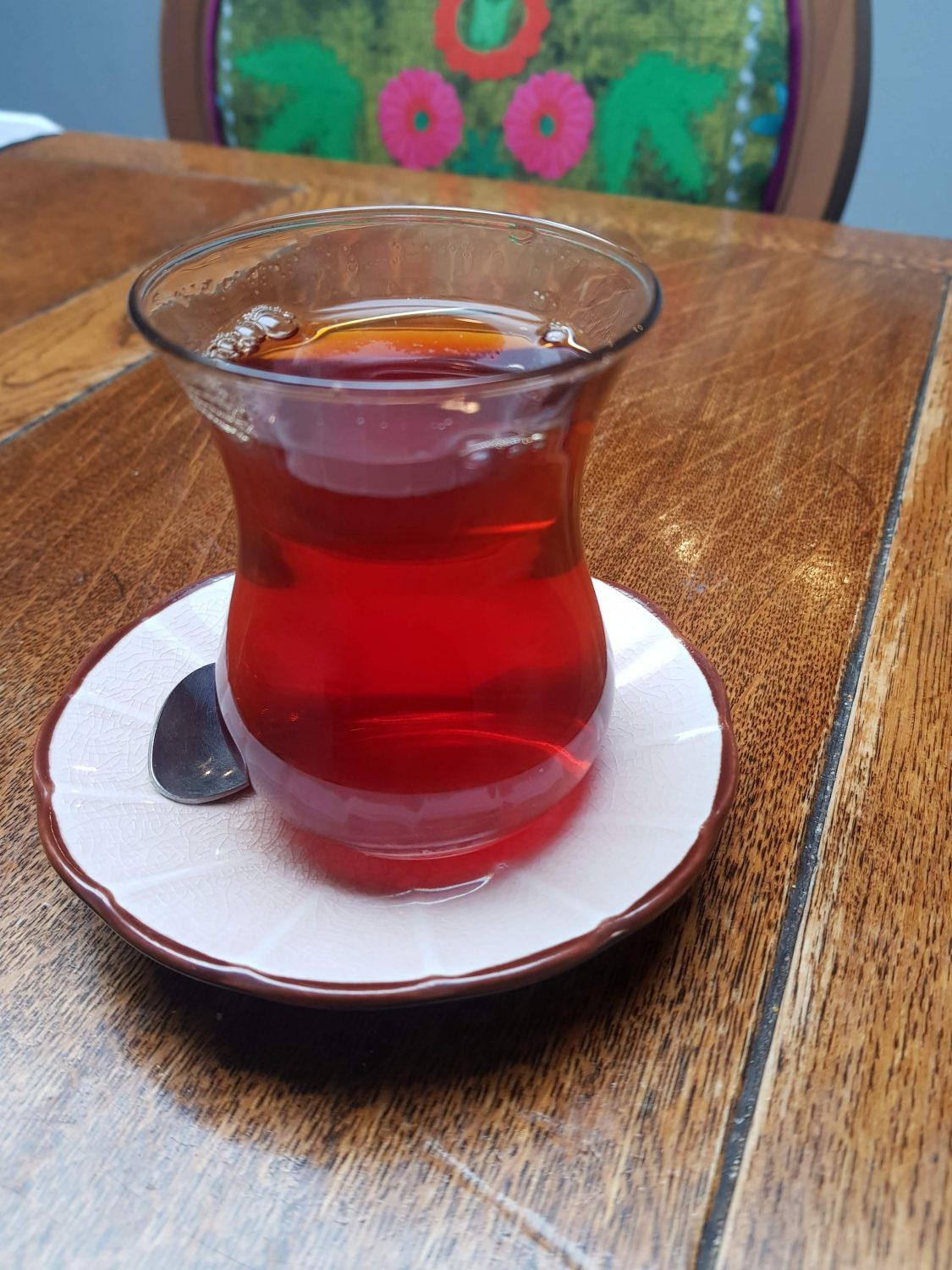 Overall, lovely owners, reasonably priced and absolutely scrumptious dishes which do justice to Turkish cuisine. Definitely one to add to your brunch list, specially if you’re in North London!